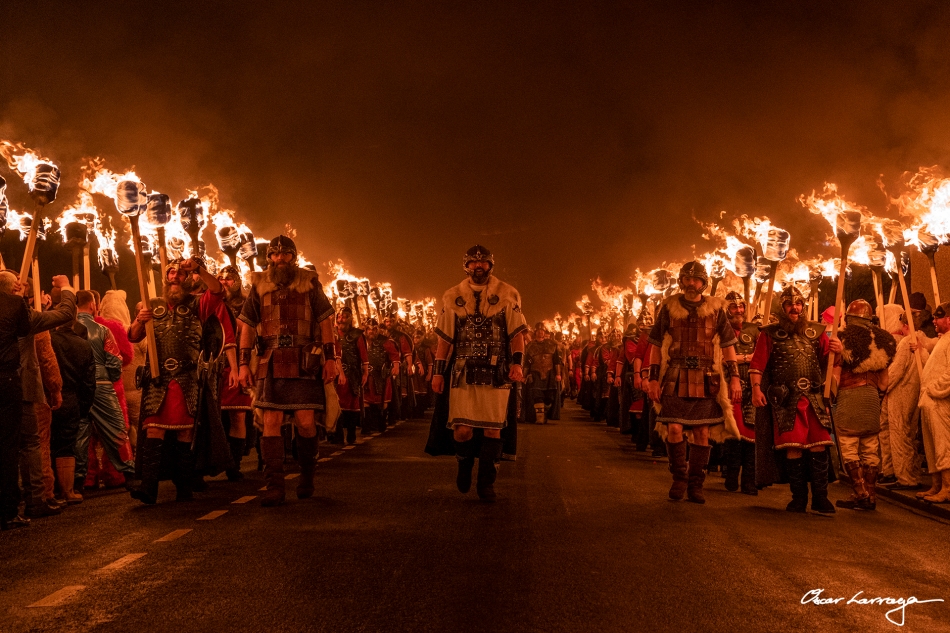 On the last Tuesday of January Lerwick burns to bid farewell to Yule in a festivity which honours the viking inheritance of the Shetland Islands.

The Up Helly Aa festivity is the most important and characteristic celebration from the Shetland Islands. On the last Tuesday of January of every year, the town of Lerwick dawns invaded by a Viking squad which only vanishes after the next sun rising.

In Lerwick, the committee responsible for the festivity begin to organize everything in February, when the Guizer Jarl is designated. During the Viking era, the Jarl was a governor with a title similar to that Earl or Duke. The word Jarl comes from the Nordic mythology and given Shetland and Orkney’s Jarls stood out historically, the leader of the Up Helly Aa ended up receiving the title of Jarl.  The person who embodies the Jarl changes every year and can only become Jarls those men who have been part of the committee for at least fifteen years. Once the Jarl is elected, its team, known as Jarl Squad, is in charge of designing and making the Viking costumes which will be worn during the celebration, and from September on, they start to build the drakkar, a Viking style galley, designed by the same squad.

The Up Helly Aa celebration begins when the Jarl Squad, formed by over fifty Vikings, starts to parade by the streets of Lerwick at 8:30 in the morning accompanied by a musical band formed by bagpipes. Little by little, the streets get full of spectators who follow the march to the Toll Clock Tower, the fist stop. In this small commercial centre filled with inquisitive people, the Jarl Squad sings ceremoniously. It is a very intense moment for Shetlanders because in this instant they discover what song has been chosen for the annual edition. The parade continues to the British Legion headquarters and, next, they head towards the centre of the village. During the procession they take the drakkar to the Bressay ferry terminal and keep their way next to the pier.  On the way back to the ferry terminal, where the squad will get the official photograph taken beside the drakkar, they go through Commercial Street, Lerwick’s main street.  Once in the middle of the town, in the Cross Market, the Vikings get themselves put around their leader in order to sing the chosen song and, afterwards, the Jarl recites a speech that finishes with a loud applause. This speech is written on a huge bill which remains in the Cross Market for all day.

Nevertheless, although during the rest of the day the Vikings visit important buildings like schools, the museum and the Hall, the cherry on the cake happens at nightfall. Around 19:30, almost a thousand torches light in unison and begin to march by Lerwick, transforming its streets into a huge fire snake that slides between the houses of the Shetlander town. Apart from the members of the Jarl Squad, who accompany the drakkar in their Viking suit, the rest of the squads, dressed up as anything, parade singing with the lighted torches until reaching the celebration highest point with the burn of the drakkar. In the playground, between St Olaf and King Harald streets, all the guizers put themselves around the drakkar and after the Jarl’s speech and the chant, the marchers throw the torches at the drakkar, whose flames rise towards the sky while the galley vanishes, commemorating the end of Christmas.

However, the festivity doesn’t end here. After the burn of the drakkar, Shetlanders head to several private venues where the celebration goes on until dawn. While people drink and dance at the rhythm of music, the different squads visit the distinct venues offering a small show and dancing with the others.

Although this celebration honours the Viking legacy of the islands, has its origins in the 19th century. During the industrialisation century, Shetlanders celebrated the end of Yule lightning tar barrels and rolling them on the streets. Nevertheless, in 1881, once the authorities realized the recklessness and the danger of the celebration decided to replace the barrels for torches.

The following year, taking an advantage of the visit of the Duke of Edinburgh, the inhabitants of Lerwick put all their determination in the torches parade and from then on, it is celebrated capriciously every year. Even though, it wasn’t until 1889 when the drakkar was added to be burn at the end of the event. Shetlanders hold this festivity in high esteem, is so important to them that the only years in which has not been celebrated were in 1901, because of the Queen Victoria’s death, and during the World Wars.

Despite the Up Helly Aa celebrated in Lerwick is the most known, spectacular and crowded, it isn’t the only fire festival in the archipelago. Between the months of January and March, this celebration takes place in other municipalities from the Shetland Isles. In the village of Scalloway, for instance, which is the village that opens the Up Helly Aa season, the burn of the drakkar is done over the waters of the Atlantic Ocean, and in other villages, instead of burning the galley, the torches are thrown into the sea.

Finally, it is curious that being a question of a festivity whose folk intention is emphasising the Viking origins of the isles’ culture, women aren’t able to participate in the Up Helly Aa of Lerwick, regarding that in the Viking society, woman was considered as the soul of the community. In addition, although war was not among woman’s main duties, it is true that Viking society is one of the those with the largest number of female warriors (Skjaldmö).

Over the last years, this inequality has given place to disputes and arguments with the organizational committee. In fact, during the celebration on the 28th January 2020, a banner which illustrated a Viking shieldmaiden riding a horse, was hanged in the middle of the Cross Market as vindication. Let’s hope that next edition (2021) not only men, but also women, parade waving their torches by the streets of Lerwick.

0 comments on “Up Helly Aa”