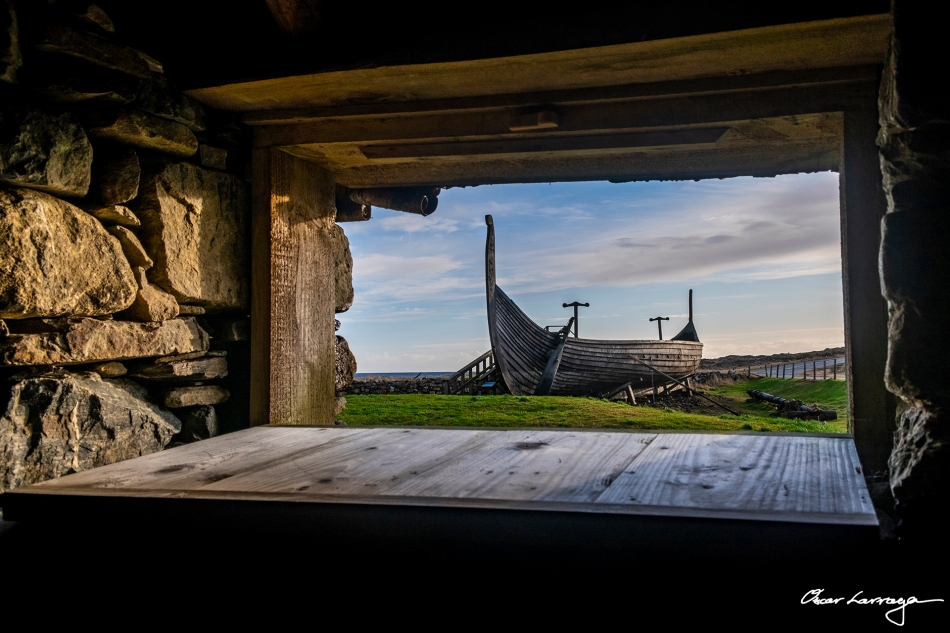 Although the Viking era ended centuries ago, Shetland Islands are steeped with its history, while Norse Culture continues latent in the inhabitants’ identity.

Shetland Islands, also known as Zetland, are the most northern islands in the United Kingdom, since they are located over 100 miles north from Scotland. These remote isles placed adrift between the Atlantic Ocean and the North Sea have been inhabited since the Iron Age, as demonstrate the remainders of many brochs built by the Picts.  These circular and stone fortifications in the shape of towers are found all around the islands, especially in Mainland. As it is the case of the runes of the Broch of Culswick, located in the west of the island, a few metres from the Atlantic Ocean. Nevertheless, the world’s best-kept broch is the Broch of Mousa, which is found in the isle of Mousa.

The Picts, however, have not been the only people who have marked they’re path in these islands. The Vikings arrived from the North Sea to the Shetland Islands around the 9th century. Their prosperous expeditions towards the Faroe isles and Island would turn the Shetland islands into a strategic point, given the fact that being between the Scandinavian peninsula and Island, the isles would come useful as merchant harbour between their different territories.

Although is well-known that during the Dark Ages, the Norsemen were famous in all Europe for their ferocity and their thirst of battle, some Shetlander archaeologists recon that the isles conquest was not executed through implacable lootings of the Pictish villages. According to what has been found in some archaeological sites at the south of Mainland, some scholars consider the possibility that Vikings and Picts tried to live together taking an advantage of their respective skills. For instance, in Old Scatness, an ancient Pictish settlement, several Scandinavian utensils have been found; and further south, in Jarlshof, one of the most spectacular and well-preserved archaeological sites of all United Kingdom, some longhouses (typical Viking house) have been discovered beside a Pictish broch. On the other hand, different experts maintain that Vikings devastated the isles until they finished with the Picts’ freedom, occupied the brochs as defensive buildings and set their houses next to them.

Coexisting harmonically or not, in time, the Scandinavian culture was imposed over the Pictish one, replacing the circular houses for long and rectangular ones and substituted the Celtic believes for the Nordic mythology.

Even though, from the 10th century on, missionaries started to come from Ireland, who, as time went by, ended up converting the Vikings to Christianity. Was then, when they built the Saint Olaf’s church, in the isle of Unst, and Saint Ninians chapel, in the isle of the same name, which is united to Mainland by a tombolo. Both churches date from the 12th century and although from the last one only the base that marks its perimeter is left; Sant Olaf’s Church, except for the roof, is still standing.

Despite the interest of Alexander III of Scotland to expand his kingdom, Scottish never achieved pulling up the islands from the King of Norway’s hands through war. While the Battle of Largs of 1263 ended up being favourable for the Scots, the Vikings ruled over the Shetlands for 200 years more. The islands became scotch land as a result of the marriage of James III of Scotland and Margaret, a Danish princess, in 1471. Given the weakness of Norway and Denmark, caused by the Black Plague, the king had to offer the Orkney Islands and the Shetland Islands as his daughter’s dowry.

However, the Nordic culture prevailed for centuries. Shetlanders kept speaking Norn, the language brought by the Vikings from Western Norway. Actually, the dialect that is currently spoken in the Shetlands has many terms from Old Norse. Besides, the name of many villages and natural sites have their origin in Scandinavian words. As it happens, the isles’ capital, Lerwick, means “muddy bay” in Old Norse. Moreover, many streets’ names are related to Scandinavian figures, such as the kings Erik and Harald.

Regarding their lifestyle, it did not change excessively. The crofts that were set during the Viking stay keep working as the main economic activity of the isles. These days, some remainders next to the beach of Sandwick are still recognisable; the same as a few longhouses near Sant Olaf’s Chapel, at the skirt of a hill crowned by a broch.  Nevertheless, the arrival of Vikings turned the fishing into another of the most important economic activities. During the Norse era many harbours were built in the Shetlands. One of the most significant was located in Fethaland, in the north of Mainland. This pier was not just the islands’ busiest one, but was operational until the 19th century. Nowadays, some of the lodges where the fishermen stayed during the fishing season can still be visited.

Among the cultural aspects brought by the Vikings, not only survived the fishing and the language. The reason why most houses have a rectangular shape is due to the Scandinavian influence, whose style is still present.  If it were for the Picts, who knows if Shetlanders would continue living in circular houses?

Additionally, the wool-textile tradition was also brought by Vikings and, currently, the Shetland woollen products possess a prestige the islands’ population is quite proud of.

Nowadays, among the main economic activities, the same ones continue to be found; crofting, especially ovine and in a smaller degree bovine, and fishing, both deep sea and coastal fishing. In fact, the 90% of the catch sold in United Kingdom pass through the Shetland Islands.

Furthermore, tourism is an increasing economic activity. The Viking legacy conservation in the Shetland Islands as a culturally identity element for the Shetlanders works quite well as a touristic attraction for foreigners. In the isle of Unst, for example, a reconstruction of the Norse ship Skidbladner and a Viking longhouse were built, which can be visited at any time of the year.

However, the most remarkable Viking inheritance element from the Shetlands is the Up Helly Aa festivity. Every last Tuesday of January, more than fifty men dressed up as Vikings parade by the streets of Lerwick stopping at significant buildings to sing songs ceremoniously. Nevertheless, the celebrations’ most important moment happens at nightfall, when hundreds of torches are lighted and march until it reaches its highest point with the burn of the drakkar, a Viking style boat.

0 comments on “With Viking Roots”