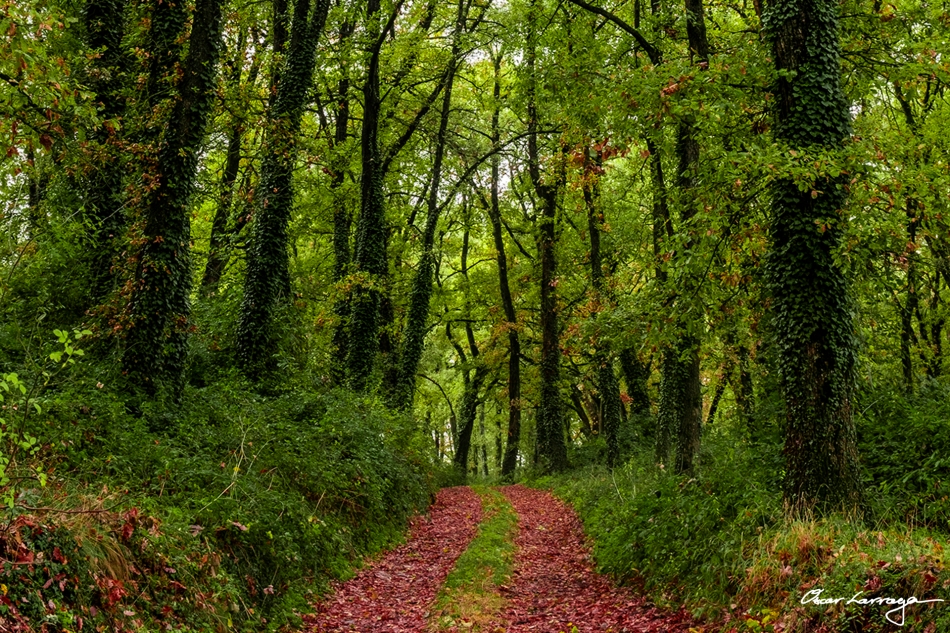 From the Marfà valley to the forest of la Ribera, la Sauva Negra and the woods of Casanovas; nature and humanity have shared even the most inhospitable corners of the shire of El Moianès since immemorial times.

Extended on the top of a high plateau located in the middle of Catalonia, el Moianès is an area hardly explored. However, when someone slips away among the trees that dress the hills, discovers that the human being has reached every corner of these lands.  Between the shires of Osona, at the north and east; el Bages, at the west; and el Vallès Oriental and Occidental, at the south; el Moianès, with multiple forests and some water streams, presents several rambles to do by foot, bicycle or horse.

The forest of Casanovas is a small oakwood situated at the east of the village of Collsuspina. The fresh and wet weather from the area lets the growing of a forest full of deciduous trees surrounded by crop fields and crossed by the old Cami Ral (Royal Road) from Vic to Manresa. Inside the woods, several walks can be done by foot, by bike or even by horse, since -although it’s a quite dense forest- the paths are wide enough and well-traced. If we follow the main way, that crosses the woods from Collsuspina, we can reach the three century oaks, known as els Tres Roures. These three trees, which grow at the edge of the forest are very appreciated by the area’s citizens. Furthermore, if we continue the road, that gets away from the trees, we can arrive to the Pla de Querol, where an ice-well and a vineyard hut can be seen.

Apart from the forest of Casanovas, in this shire there also stand out the beechwood of Sauva Negra, in the municipality of Castellcir, and the woods of la Ribera, in Santa Maria d’Oló, which consists in a circular path that goes along the edge of the river of Oló from the old mill of Altimires to the Sant Joan Vell (Saint Old John)’s runes; at this spot, the way goes back through the mountains’ shadow to the village. Although this ramble can be done by foot or bicycle, since it’s a flat trail, if we decide to go up to the top of the Tosqueres range, we will be able to see how the water has drawn through the years a rough landscape, starred by cliffs, torrents and fluvial terraces.   Moreover, this relief not only stands out for its steep shape, but for the soil’s reddish colour.

Nevertheless, if we want to visit fluvial landscaped, the Gorgs Blaus (Blue Pools) are a must. Located half an hour walking from Monistrol de Calders, these pools stand out for the high walls that the water has been outlining through centuries and the rounded silhouettes caused by the stream’s erosion. Placed into a small valley, whose access is a modest trail along pinewoods, when the river carries much water the pools are filled and if the sky is clear and bright, the water reflects the colour of the sky and turns blue; this is why they are known as “Blue Pools”.

If we followed the GR3 to Moià, we would arrive to the Marfà valley. In spite the nearest village is the shire’s capital, the valley belongs to the village of Castellcir.  Crossed by the Golarda river, the spot of Marfà is mostly formed by pines, even though holm oaks can be found too.

The valley of Marfà offers a wide variety of excursions to do by foot. The main attraction of this protected place is the Brotons Mill. Located practically under a beautiful waterfall known as the Waterfall of La Tosca, it was built taking in advantage the cave that forms the ceiling. It is known that at the beginning of the XVII century, the mill was already inhabited and it was in operation until 1863, when during a huge storm the river knocked over the eight members of the miller’s family. Although since the miller’s death the mill has been abandoned, it is well-kept. In fact, if we cross the river, it is possible to enter and have a look to the inside. Besides, from there it’s very easy to see how the builders took an advantage of the cave in the construction of the mill.

Despite the Brotons Mill is the most gorgeous structure in the valley, it is also important to highlight the chapel of Mare de Déu de la Tosca or the old parish of Sant Pere de Marfà, built in the XVIII century on the top of  cliff, near the noble house of Marfà.

As proves the dolmen of Pla de Trullars, human beings have been inhabiting this land since millenniums ago. Since then, every forest, valley and hill has been scrutinized in order to find any place profitable to build churches, castles, mills and country houses or just to farm and herd. However, years have passed by and many places have been left to an immutable nature that capriciously keeps the puzzle’s pieces which portrait a memory of a lifestyle that once took place.

0 comments on “Among remote landscapes”