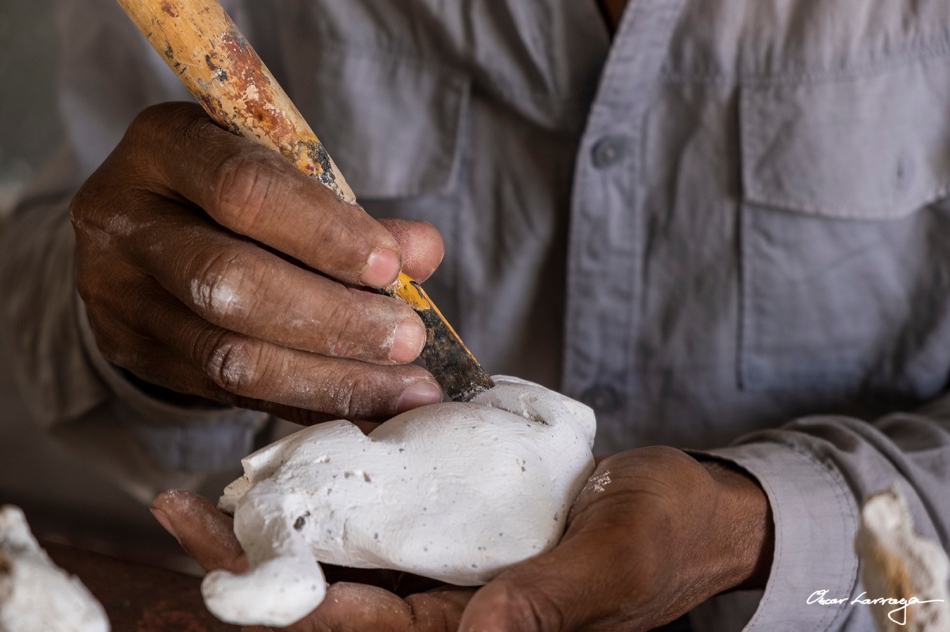 In the refugee camps of Tindouf, Elarbi recreates his people’s traditions in the shape of sculptures made from litter in which he captures his Saharawi identity.

Elarbi is a Saharawi artist who lives in the refugee camp of Smara, in Algeria. Born in Western Sahara, in 1976 he had to flee, beside his mother, from the bombs and the Moroccan occupation to shelter in Algerian land. Since his youth, he showed interest in art and proved his talent building manual artefacts. Although his basic studies were carried out in the wilaya of Smara, where he set with his family, his college formation took place on the other side of the Atlantic Ocean, in Cuba. He lived there for seventeen years and graduated in Fine Arts. However, he got back to the camp of Smara and became the promoter of the Artistic Creation Centre of Tifariti, giving space for art, for the first time, in a Saharawi refugee camp.

This project has been developed since the last four years from two different aspects. In first place, Elarbi builds sculptures through which represents the most traditional Saharawi elements. Due to the lack of resources of living in a refugee camp, Elarbi uses the rubbish he finds on the street as raw material to elaborate his sculptures.   As a result, his art not only shows Saharawi traditions, but transmits the message that “the art can make everything useful” even what’s discardable.

Elarbi finds his inspiration for the design and the construction of his work walking around the refugee camps. Generally, he sees any object thrown on the floor that catches his eye and, instantly, his brain starts thinking what to transform that into. Then, he goes back home and gets himself ready to draw sketches until he stumbles upon the final design.  Once the drawing and the materials required are decided, he goes finding the raw materials that he needs on the street. Finally, when everything is ready, he begins to shape the sculpture he has in mind, so that everyone can look at it.

Among his main work stand out the sculptures of the “Milk Pot”, the “Camel Saddle” and the “Saharawi Traditional Well”. Nevertheless, if there is a sculpture that must be highlighted is the “Tea Ceremony”. Actually, the tea ceremony is one of the most ancient, daily and traditional Saharawi customs. Every time they do this everyday ritual, drink three glasses, prepared slightly differently: the first is bitter as life, the second is sweet as love and the third is soft as death. However, the three glasses must be served with froth. So, while the tea is brewing, the infusion is moved from one glass to another repeatedly until there is enough forth in every glass. This particularly moment from the ceremony is the one that Elarbi has portrayed, since in his sculpture appear six pairs of glasses trespassing the tea from one to another. Although some traditional elements are still present nowadays, like the tea ceremony, others have practically disappeared, such as the traditional well and the camel saddle. Therefore, his work is also used to show the youngest their cultural roots and oldest customs.

On the other hand, jobs aren’t plentiful in the refugee camps. Therefore, in order to earn some money to live and keep the Artistic Creation Centre, Elarbi has a small showcase where sells different minor works: from teapots decorated by himself with Saharawi stories, to paintings about their ancestors lives and typical utensils from his people.

In second place, Elarbi gives art classes in the school of Tifariti. He teaches them different technics to elaborate their works, such as papier mache, acrylic and oil painting. For him, education is fundamental in a society, especially on the artistic level, because it develops the children’s creativity, who respond enthusiastically to this kind of work. Furthermore, Elarbi’s art inspires the new generations to be imaginative to build new facilities from apparently useless elements; he exemplifies it making a table out of tyres.

Elarbi understands art as the opposite of politics. Whether politics is dirty, “art is fleeing from what is mean and doing what is beautiful”. Many refugees, among whom is Elarbi, think that “politics is a way of invasion” and that “what is taken by war […], can only be regained by war”. The artist has the hope that his people will return to their born land, Western Sahara, one day, but he has lost his trust in the UN’s negotiations and promises, which are being almost thirty years delayed.

It’s because of the huge political problem that the Saharawi people have been carrying for so many years, that Elarbi believes that most refugees from the camps aren’t up to art yet. This is why, at the beginning, his neighbours didn’t like him to collect so much litter, since they weren’t able to see what could get out of that amount of rubbish. Nevertheless, when they discovered the beauty and the utility of Elarbi’s work, they changed their mind. In fact, some refugees, were so satisfied that started imitating his technics to take advantage of what they thought to be worthless.

Consequently, Elarbi’s art goes beyond any aesthetic creation, but -driven by social aspirations- he tries to transmit a cultural identity and inspire third parties to use their ingenuity and creativity to pull ahead with the little they have.

0 comments on “Tradition recycled in art”